I have successfully lured you away from looking at another batch of cat pictures and/or getting into an argument on the internet about Trumps’ impending presidency and why the last Star Wars movie sucked (it didn’t).

Yes, I realize that aforementioned luring-away might have upset you, but I don’t really care.

Just as Montaigne stated while prefacing his seminal work  – Essays – let me in turn start my preface by saying that I preemptively excuse myself for not being apologetic anymore in the future (not that I compare myself in any way to Montaigne, besides the fact that I’m partially french and have been in Dordogne.)
Browse this blog at your own risk of wasted time-expenditure.

If you still want to know more, by all means, continue on.

So, what AM I going to write about? Everything and nothing. More nothing than everything in all likelihood. This will include – but not be limited to (CAN YA ALREADY TELL I WORK IN THE FIELD OF LAW??IS THE INHERENT AMBIGUITY ALREADY ANNOYING YOU??) what I did a certain day, what annoys me, what infuriates me, reviews of shit appliances that broke down, reviews of foods that broke down my shit appliance. Basically anything really. No subject is to be spared. No detail to be overlooked. As my friend Eline puts it eloquently ‘this is perfect toilet reading, for when you’re done with the instructions on the lavender-spray’. I’m perfectly fine with this very specific target-demographic. Also, depending on your particular brand of lavender-spray, it doesn’t set the bar very high for me, so that’s a burden I won’t have to carry. The way I see it, if you have zero expectations, you can’t be disappointed right? I’m perfectly fine sitting snugly in between Proust and lavender-spray canisters. Easy does it.

In the very slim chance your Instagram-feed didn’t explode with overzealously superficial New Year resolution posts of the models you follow that all end up in something related to squad goals, like everywhere else in the world  we’ve entered a new year in Belgium too.

Aaaah, sweet sweet 2016. A new year, and new false promises. How I rejoice in seeing you finally arrive, laden with a fresh basket of endless new possibilities to procrastinate. True to myself, I haven’t set the smallest goal for 2016 as of yet. I’m still coping with the disenchantment that results from doing 10,220 situps and not having a single result to show for it. That’s right. Given the fact that I’m 28 and have gotten out of bed every morning of those 28 years, this results in a staggering 10,220 sit-ups performed (and more if I count all my naps during school, but that would be boastful)  yet I do not -and I just checked – have a single ab to show for it. I’m not a math genius (or any other kind really) but statistically, in absolute numbers that’s got to hover closely around the ‘0’ mark. I figured out early on in 2016 that whatever I’d promise to do, it wouldn’t top doing 10,220 situps. So – as Homer Simpson puts it nicely – since trying is the first step towards failing, I’m calling 2016 l’année de l’apathie. Apathy central really. Everything is possible, nothing is probable. 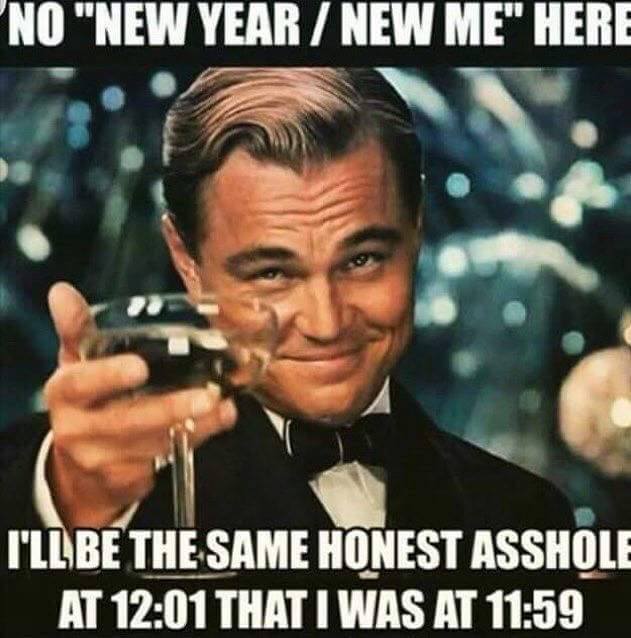 Christmas also happened like every year. After the cataclysmic sartorial debacle that was the cat-sweater in 2014, I vowed to myself to make the ugliest, most despising Christmas sweater possible for this holiday season. My friends would bear witness to the atrocity that is 2015’s edition. Rejoice in the horror they had to witness more than once (if you’re going to put so much time and effort into it, you have to justify it at a certain point by wearing the damn thing more than once). If The Hunger Games were a sweater (There’s 1 person in the room that will not get this reference. I’m OK with that) it would be this sweater. The chances of getting stabbed and bleeding out to death were very real given the surprising number of safety pins that were ready to burst open at a second’s notice, so was the possibility of electrocution (do I look like someone you would trust with live wires?) and burning (that sweater was made of what was probably THE most flammable/itchy material on earth). Accidental hanging became a hazard I needed to learn to deal with quickly, something that I hadn’t had to take into account when wearing sweaters before as well. Life is all about new experiences right? All in all, worth the hassle. It’s also the only time in my life I’ll probably literally light up the room.  : 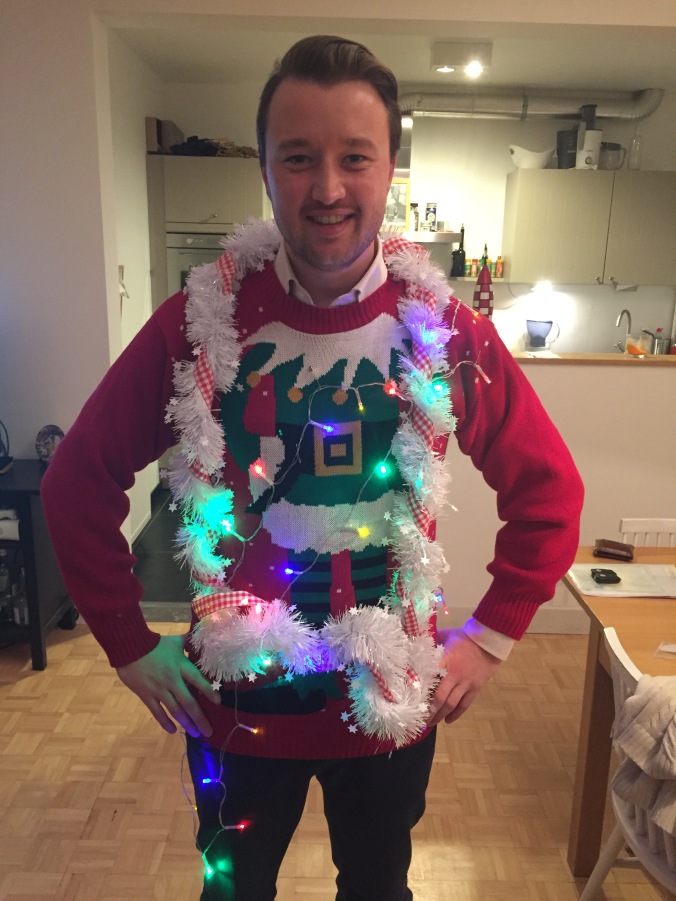 I haven’t received a call from Elon Musk as of yet, but I’m sure I’ll be able to sell him this awesome battery technology that powered aforementioned fugly sweater. Hint : it’s not solar-powered.

I’m currently heavily researching options for the sartorial holocaust that promises to be the 2016 holiday sweater. I’m taking suggestions as well. Send me the good stuff (by which I mean the absolutely ungodly, fugliest sweaters you’ve come across.)

Also, evidently New Year came and apparently never ever left again. It’s like that one cousin that asks you for a crashing place on the couch for a week and ends up finishing your box of Fruit Loops 6 months later, while you’re standing there in your underwear, shaking the empty box in disbelief and asking yourself why and how he’s still here.

There isn’t much to say besides the fact that we threw a little Russian-themed party in a castle and a lot of people (including yours truly) indulged in a  boatload of home-made distilled-potatojuice-based potion. We concocted a drink so enticing and inebriating, our complete stock was distributed amongst everyone in less than 90 minutes. Seeing the way people threw themselves on this beverage, as if they had been dehydrated refugees throwing themselves on a bottle of fresh water, I think Russia needs to re-evaluate their exporting priorities and shift them from oil and gas (which no-one seems to want at the moment if you take a look at their course) to vodka, in order to sustain their export growth.  Evidently we also dressed up for the occasion. Our subtle mixture of bellboy-meets-some-sort-of-Bolshevik-soldier was generally praised all around, so we congratulated ourselves multiple times with celebratory homemade vodkashots. 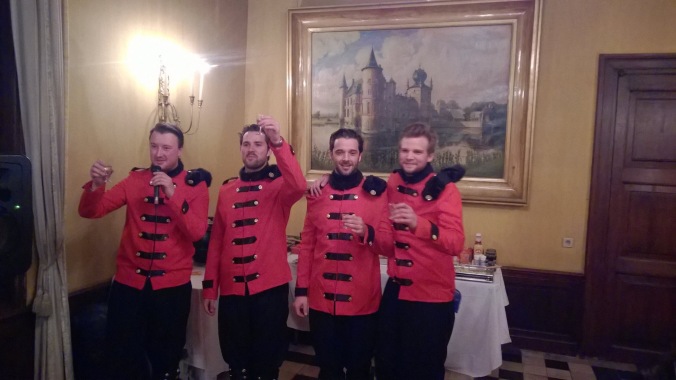 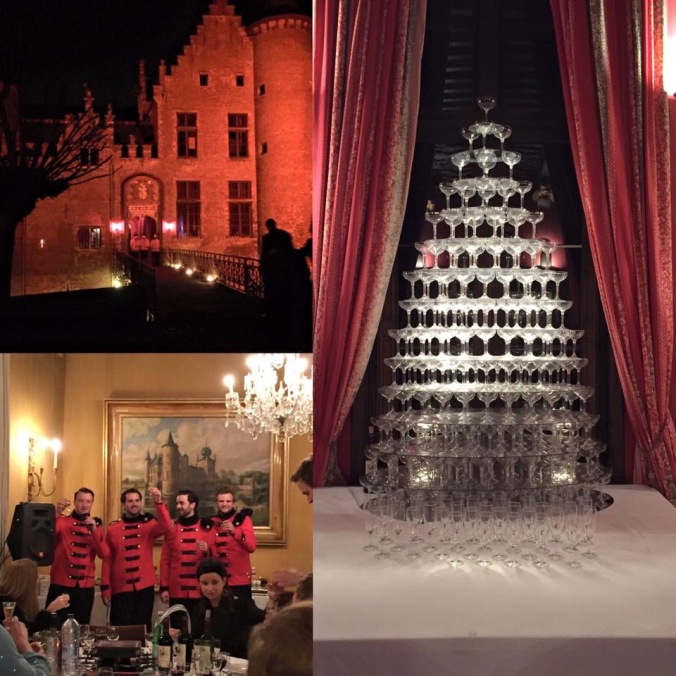 Yes, anyone with OCD should try setting up one of these towers. Cure guaranteed. Dementia assured.

What innocently started off as a 1-night castle-getaway from the mundane, misery-inducing grayness that is Belgian weather, quickly turned into a 4-night drinking-marathon the likes of which had not been seen since Caesar tried to make the Romans forget how shitty (no pun intended) their lives really were. We got drunk for 4 consecutive days, until I couldn’t differentiate the vibrating on my phone indicating an incoming WhatsApp from the buzzing of my liver indicating my impending death. Talking about iMessages and FaceTime, I never realized how creative 11am-tequila makes you. Indeed, it only took a couple shots of Espolon (Or exploded colon, as my Californian literary wunderkind Olivia would say) to come up with this super-design, FREE, iPhone holder strapped to a bottle of suspiciously empty J&B. Yes, we ARE commercializing it due to high demand , don’t worry. So yes, expect that in your nearest Apple store in 2016, for the sweet, sweet price of 99.99$. (Research and Development costs a shitload,yo). 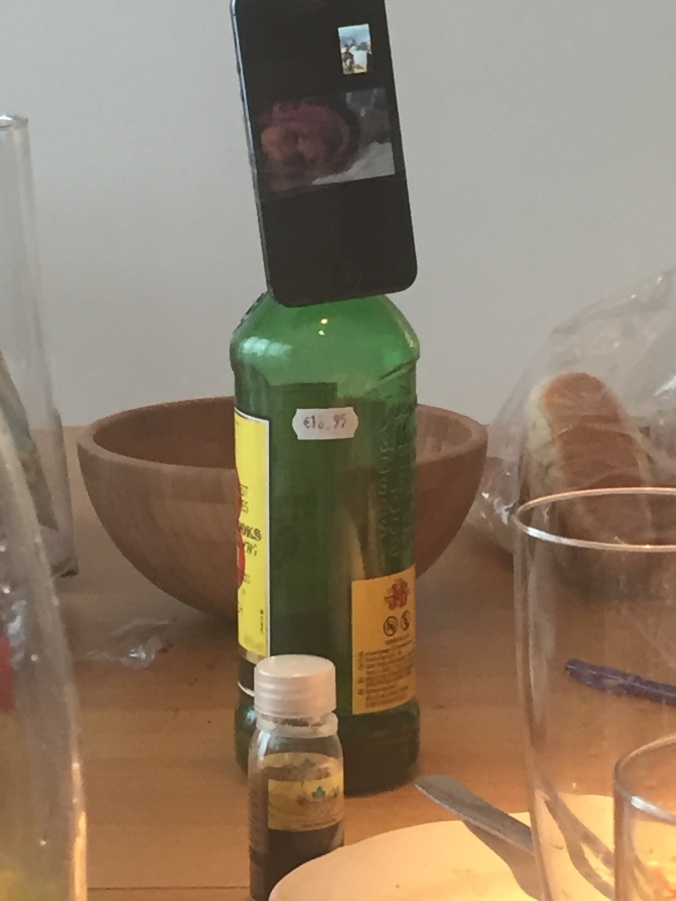 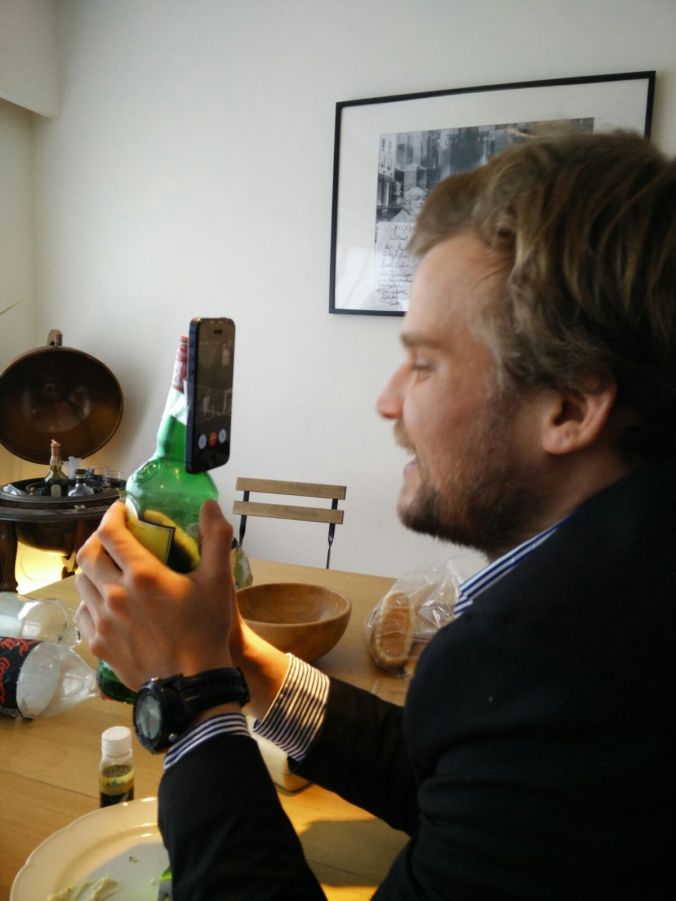 Real-life use. Notice the increased stability due to bigger hand-coverage area, making your drunken bootycalls that much more steadfast.

Speaking of complete useless wastes of space, I don’t know what frightens me the most : the fact that Trump answered ‘sex’ to the question as to what he and his daughter had in common (she answered in a very politically correct, albeit overly platitudinous-as-fuck way : Real estate and Golf) or the fact that he will, in all likelihood, be the Republican candidate for the 2016 elections. There’s something deeply misconstrued with the fundamental basis of a society that thinks building a giant wall at the bottom of the country is the solution of alien immigration. I never lost sleep over North Korea successfully testing the H-bomb, or the exponential melting of the polar ice caps, nor over the imminent, million-year overdue eruption of the supervolcano under California, or even ebola reaching the European continent, but I can honestly say that – as Gandhi would put it – this shit cray. When there’s a roughly 50% chance of a former roastee becoming the keyholder to the world’s largest supply of nuclear weapons I will fucking lose sleep. The fact that Sarah Palin is now also openly supporting him for his presidency, is the equivalent of trying to spark a doobie (as the cool cats would say – i’m not one of them) while filling up your already burning car with gas. The result is bound to be disastrous anyway, but it really doesn’t help. And now, the appeasement brought forth by people saying ‘Oh but he’ll never win, don’t worry’ doesn’t provide the necessary relief. Those where the same people telling everyone ‘Oh but he’ll never survive his first debate’, and look at that : he’s been knocking them out of the park faster than the poor minorities he keeps kicking out of his buildings. So no, thank you very much, I will not fucking chill. There is no chill. There’s a very real possibility that he’s just going to kick out another black family from their house, the white house, as he’s done countless other times.

In other news, the Democratic People’s Republic of North Korea (can ya say that with a straight face? Democratic? They must have a vastly different understanding of the word ‘democratic’ than we do. Kind of like how every redneck in the USA thinks the concept of ‘socialism’ that Bernie Sanders is trying to promote in the States is the very same one as the one propagated by the likes of Hitler, Stalin, and the rest of that fun crowd.) recently disclosed a press release about how they are the first ones having developed booze that doesn’t give you a hangover. I don’t know if you’re as interested in North Korea as I am, but I feel that this wasn’t the problem that necessitated the allocation of their (what I can only assume to be small) global research budget. It wouldn’t probably even get a spot on the Top 3-podium of problems that the country needs to fix, before developing hangoverless-booze. Regardless of the factual veracity of their claim (Allegedly they would have lied about landing their astronauts (Koreonauts?) on the sun. Yes, the frigging sun. Shocker really. You can’t spend more than an hour in the Qatari desert without burning to a crisp, but landing on the origin of that very same problem should be fine.) Anyway, I think a bold claim as that merits a trip to Pyongyang, just to verify if they’ve actually succeeded in making every working person’s lifelong dream. Any takers? They seem to have the weather going for them, so that’s a plus I guess…

So yes, all in all, I’ll try not to render 2016 as useless as that time a hotel manager in Japan came to us with an ironing board so comically small one couldn’t iron half of one of Shaquille O’Neill’s socks after we asked him if the hotel had a laundry service. But I make no promises, just like the hotel manager did.

Also, I might never post again. It seems to be a fashion faux-pas to launch a blog, and you know, actually maintain it updated afterwards. A good blog, like a gym membership subscribed to at the start of the year, should be used not more than once.

2 thoughts on “Much ado about nothing”